Hi there. I’m still here. I hope to get my dictation program working today so I can type up a real post! Be back soon.

Sundays are the first day of the “work week” for me because B works Sunday to Wednesday. I have decided that Sundays are my “day off” where I’m not allowed to do anything all day and I have to put aside all worries for the day and just relax and watch my TV shows without guilt and read a lot. It’s really helpful to just totally set aside that one day that you don’t have to do anything. I end up actually doing some things most of the time just because there’s no pressure! Like today I’m doing wedding stuff while watching a Downton Abbey marathon and I’ll probably do some cleaning later (JUST BECAUSE I DON’T HAVE TO).

I you like I have been eating SO much lately and not doing good on my goal of eating more protein. I feel pretty disgusting but I also just kind of feel frozen right now and directionless. L

My sister picked out the bridesmaids dresses. This is the one she picked from David’s Bridal if you want to see it. Click on the color swatch on the side labeled “Marine” to see the color I picked. I really wanted them to wear long dresses but I also just wanted my sister to pick what she felt best in. T was so surprised that she picked a long dress anyway! So that worked out well. She is only 20 years old so I figured she wouldn’t go with the long style. 😉

Today I e-mailed my cousin, who lives in Montana, to see if she is okay with ordering that same dress online so they match. This is the girl I love so much but who suggested that we get them at Target! I offered to pay for 50% of her dress because I think it’s a money issue for her. I personally think the concept that the bridesmaids have to pay for their own dresses is ridiculous and a lot to ask! My mom agrees and she’s paying for my sister’s dress .They’re supposed to pay for their own hair, makeup, manicures too!

There is the continued awkwardness about my second sister. We are estranged, I would sort of even use that word now. I told my mom I was going to e-mail her and ask her to be a bridesmaid even though she might say no. But I have avoided doing that because I’m torn about it. She’s the one who doesn’t want to talk to me, but I don’t know what I want to do. I really want her to be a bridesmaid because I don’t want to look back later at the pictures and not have my own sister in them. I also don’t want to deal with how awkward that would be when everyone is surprised that she’s not up there. But on the other hand, I feel like having her around me all the time on that day, getting ready together, etc., will really bring me down and make me more nervous and make me unhappy on the day that is supposed to be really special. It’s definitely a dilemma.

I’m not sure what I even want to pursue career-wise right now. I have become so very discouraged by that horrible neurologist not being supportive of me. It sucks all of my confidence away that anyone will even authorize me to have disability accommodations at a job. And that is so depressing to me. And don’t even feel like trying. Because I couldn’t work without that. I still want to get the pharmacy technician certification as an option so I can apply for jobs because that’s something that really interests me. And there’s some other venues that I could go, writing and even babysitting, or trying to do some work at home type of thing. I’m just afraid now and that really messed with my confidence. I don’t know how to start anything. But I have to do something so need to get on track and work on that this week. I have actually applied for six or seven jobs in the last couple days so that’s good.

Thought y’all might like this picture of my pug and his new friend Frankie that he met at the dog park and has played with several times. They are hilarious together. We went to the dog park every day this weekend. BEST PLACE ON EARTH. 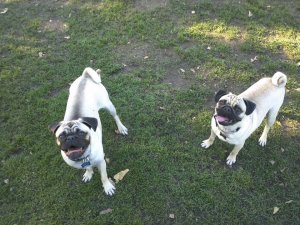 I feel SO much better when I swim. I can’t get over the fact that I can’t drive myself there and then I have to wait till one o’clock to go with B and by that time I don’t have the same energy left because I don’t like to eat right before I swim. My ideal time to go is to eat breakfast and then go a little while later. And this way just seems to make my eating schedule weird because I eat lunch so late. I just have to push through that new block that out of my mind and accept it AND MOVE ON so I actually go and stay on track with my mental health!

We’re moving into a townhouse in two weeks and I’m kind of tortured by the thought that we could have lived in this townhouse literally two blocks from the pool and I could’ve gone whenever I wanted. It was between that and the one we chose, which I chose because it’s SIGNIFICANTLY nicer and in a much better neighborhood. Since B works nights I just wanted to feel safe at night. But now of course I’m regretting not choice. Actually when I was deciding about it I knew that if I lived by myself and it wasn’t a question of two people’s lives involves, if it was just me, I know the healthier option for me would to have chosen the house that was by the pool, even to live in a more run down place. But I didn’t do that and I’m going have to live with it. I’m so indecisive. If I had chosen the other one I would’ve worried about bugs and mold and probably would have regretted it too. Hopefully I can swim in the complex, even though it’s a small pool, sometimes in the summer and I can stay strong and remember that this is a six month lease and if we have to move again there is NO WAY IN HELL I am not living within a mile of a pool! The pros to this place is that it is definitely nice and feels like a real home for us that I will be proud to have guests over. And I can walk my dog in the neighborhood at night.

Have you ever had to make a hard choice about where to move?

Any other Downton Abbey fans?